After six months in California and many stops along the way, (visiting several National and State parks ) we spent our last night at Salton Sea State Park before crossing into Arizona.

Unfortunately I cannot really say much about Salton Sea. It definitely looks prettier from a distance, especially when you come from the desert, but the smell and the dried up hard cracked salty layer of what is supposed to be beach is quite a bummer.

The full hookup sites for the RV where located in the parking lot, which surprised me as well. We wondered why we were the only campers there at first. But upon setting up, getting into our bathing suits, walking across the big asphalt parking lot and across a wide area of dried salt and seashells we realized why. The smell was awful and the lime green brew that stood stagnant did not look inviting. As hot as we were we returned back to our asphalt lot , took a cool shower in the RV instead. I'm not sure if we arrived during a bad time of year or if that State Park is always so stinky and deserted. I asked the gentleman at the visitor center about the history of this lake and he explained that it is California's biggest lake caused by breaking of levees. A Navy base was established during WW2, which is located to the south of Salton Sea and was used as a missile and nuclear weapon test site. Maybe that's what kept us from going into the water. At least we gave it a try , slept in the parking lot and rolled out bright and early the next morning.

We were really looking forward to Tucson and decided to stay a few nights at David Mothan AFB famcamp. Over 300 sites are available, several bath houses , a pet wash station, laundry facility and little club house. It was nice to take care of some errands around here. Unfortunately one night while boondocking only minutes from the Mexican border the wind was really strong, causing the vent cover in the bathroom to fly away while I was sitting on the commode. Thankfully a trip to Camping World in Tuscon took care of that problem and we bought enough vent covers to replace all of them. Tony also had to take our tow vehicle to the Car craft center on post to work on the brakes, while I took care of the laundry and groceries. I cleaned the RV pretty good after driving thru the desert and parking in isolated areas for several days. Overall Tuscon was meant for us to relax, catch up on chores and lastly explore. We noticed how much the climate helped our skin, hair and breathing. Despite the heat I did not sweat and felt comfortable. That never happened before. Even while we hiked Saguaro NP in almost triple digits -no sign of sweat. We had a headache the first couple of days and hydrated nonstop, but once we got acclimatized we felt great. 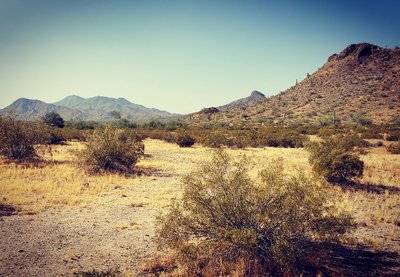 Two places were on our list to see before continuing with our trip- Saguaro National Park and Tombstone.
Saguaro NP is split in two, which confused me at first. The west side of the park is located west of Tucson where you will pass Old Tucson, a really beautiful old historic place or you enter from I10 going East. We took the first route and really enjoyed the landscape, winding through the high desert. Beautiful Saguaros were scattered throughout, almost resembling people standing with their arms stretched out.

This Saguaro seems to be holding a flower

Several shaded areas are provided along the many trails , and a water refill station is located by the visitor center. A trip to this wonderful National Park is a must when you visit Tucson.

Previous Next Table of contents

This blog requires you to be a logged in member of Travellerspoint to place comments.

If you aren't a member of Travellerspoint yet, you can join for free.